Sold, For Reference Only

+B Dorsey-Lane Live w/o Care aka “Sony”

(Click on his name to see his ADGA pedigree)

*This score was my fault, I got behind in Sony’s hoof trimming.  He has really wide feet, so I had a hard time trimming them flat and it would take me forever to get them as flat as I could and it was exhausting.  I’m ashamed to say that I got about 3 months behind, which is reprehensible to me.  Poor guy was eating on his knees, which caused them to be tender and he got a bad score, it brought his LA score down A LOT.  I’ve been faithfully trimming once a month and using a utility knife (careful not to hurt yourself if you try this), which get his toes nice and flat and makes trimming take much less time = not as difficult a task for me.  I am very happy to say that I haven’t seen him on his knees in over a month, and he is acting like his old self.  I used him to breed Galathea again this year, he successfully bred her very quickly on the first try.  God is merciful and gracious to me.  Even when I screw up badly, He is gracious.  🙂

It is our extreme pleasure to have Sony standing as Senior Herdsire at our farm.

Sony turned 3 years old recently (June 2010), he is gonna be HUGE when he finally gets done growing at 4-5 years old!   He has a great pedigree, and throws lovely flashy kids. Plus, BONUS – he is incredibly sweet and easy to handle!  Above pic was taken in July 2009.

Isn’t he gorgeous?!  Notice his level topline, his nice legs, beautiful roman nose, and massive size – I’m 5’5″ so that gives you a scale while looking at the photos.  😉  Sony is incredibly gentle with my kids, my 3 year old daughter runs right up to pet him, and his is always very careful with her – which has endeared him to me.  He is a Godsend to our herd and our family.  He’s pretty stinky, but we love him anyway.  😛

She is shown as a first freshener, she was very level, had a sweet nature, and is very easy to milk.  She had a beautiful udder – her teat placement was very nice, she had a smooth fore & very tight attachment all around.

His sire is Kastdemur’s Good Deed,

(click on the names in blue below to go to that doe’s page on the Kastdemur website.)

Are you seeing a pattern here?!  YEAH!  Sony has one incredibly impressive pedigree!!  Notice the milk stars – not only do they show well, but they can put it in the bucket too!

Check out the graph below.  Sony improves Rear Udder Height and Dairyness, and puts on a beautiful Medial Suspensory Ligament.

Live w/o Care’s kids in our herd:

(out of our doe, Lynnhaven SAH Galathea 1*M) 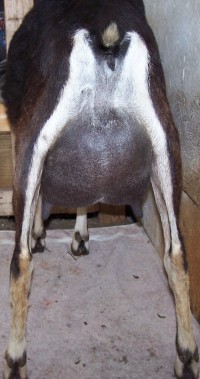 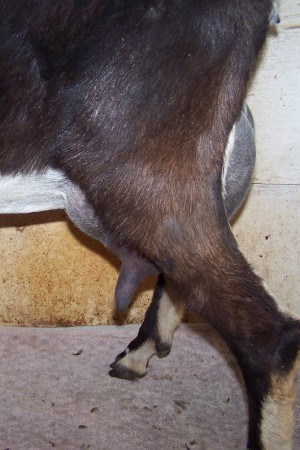 Looking for your free class? Login on the My Account page to access your classes and track your order. Dismiss